While moving my office (a project comparable to an Indiana Jones archeological dig) it occurred to me that I might be a Designosaur. Now, the Urban Dictionary defines a Designosaur as, “A graphic designer who is behind the times in learning the latest technology. An outmoded artist or designer on the way to being extinct.” But I don’t buy it.To me a designosaur is a designer who traces his roots back to the pre-digital era, the days of T-squares, stat cameras and dry-transfer lettering.Sure a lot of Designosaurs have fossilized but some of us have, like T-Rex becoming a chicken, evolved to thrive in the digital age. With that definition in mind… 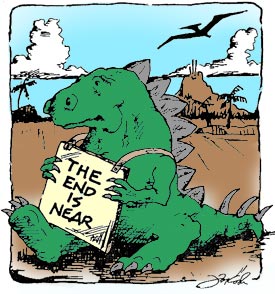